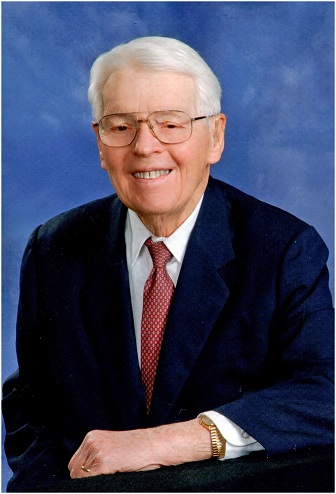 Mr. Herman Werner Weinreich passed away at his home on October 18, 2019. He was born January 8, 1927 in Brooklyn, New York, son of Justus and Wilhelmina (nee; Weihwasser) Weinreich and brother of Donald Weinreich. On May 19, 1951 he was married to Erna Gertrude “Trudy” Boecher. She preceded him in death on November 10, 2012.

Mr. Weinreich proudly served his country as a Sargent with the U.S. Army during World War II in the Japanese Theater. He was a member of Antioch Lutheran Church where he sang in the choir for almost 50 years. He and Trudy enjoyed traveling the world, having made a trip around the world 3 times.  Herman enjoyed the opera, the D.S.O. and the Detroit Red Wings. Within the family he was known as a bit of a history Buff. One of his favorite movies was Das Boot.  As a graduate of NYU he went on to become a C.P.A. and succeded in becoming a member of TEI (Tax Executives Institue). Herman spent many years with the Ex-Cell-O Corp. as a tax accountant and held the position of manager before retiring from the company. He continued to work, however, joining the firm of Moore, Smith & Dale, where he dedicated another 20 years to his profession.

A memorial service will be held on Saturday, November 2nd, with the family receiving friends from 10:00 a.m. until the time of the service at 11:00 a.m. at Antioch Lutheran Church, 33360 W. 13 Mile Rd., Farmington Hills, MI. Following the service, family and friends are welcome to the church’s gathering area where they can share in fellowship and continue to celebrate Herman’s life. Interment will take place at Great Lakes National Cemetery at a later date.

Those who wish to remember Herman with a memorial donation are asked to consider the Antioch Lutheran Church, 33360 W. 13 Mile Rd., Farmington Hills, MI 48334.