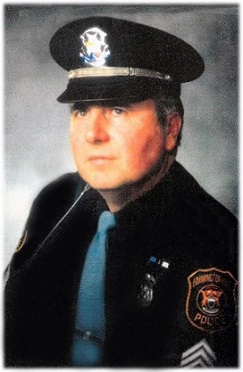 Pete was born on August 10, 1936 in Ferndale, Michigan to Peter and Mary Ellen Larion. He met Carol Mitchell while attending high school and the two became inseparable. Pete joined the United States Army in 1954 and served as a paratrooper for the 11th Airborne Division. He married Carol in 1955 and the two were blessed with three children following his honorable discharge.

After returning home, Pete went onto become a police officer and began his law enforcement career working for the city of Highland Park. He later transferred to the Farmington Hills police department where he worked for the traffic bureau and motorcycle division. He retired as a Sergeant after 38 years of dedication. Pete was also a long-time member of the American Legion.

Pete enjoyed spending time in Traverse City and in northern Michigan. He liked the occasional trips to the casino and had a good sense of humor. Pete was always very supportive and generous to his children as they were his whole world. He will be missed by his beloved family.

Pete is the loving husband of Carol for 65 years; devoted father of Dave, Tim, and Stacy; cherished grandfather of Sean; and dear brother of Maude and the late Dorothy, Paul and Ruth. He also leaves numerous nieces and nephews.

Mr. Larion’s family will receive friends on Wednesday, July 22, from 4:00 p.m. – 8:00 p.m. with his Funeral Service beginning at 6:00 p.m. at McCabe Funeral Home, 31950 W. 12 Mile Rd., Farmington Hills. In lieu of flowers, Memorial Contributions may be made to the DAV – Disabled American Veterans in his name.