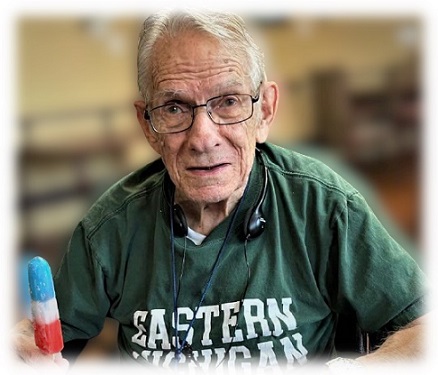 Richard Suetterlin was born on July 19, 1930, in Bay City, Michigan. Following his graduation from Redford High School, Richard proudly served in the Michigan National Guard for many years. On June 21, 1952, he married the love of his life, Sue McClenahen. The couple settled in Farmington Hills where they raised their five children. Richard was a skilled draftsman throughout his working life and retired from Ford Motor Company in 1985, but was contracted back for a few years. In 1991, Richard and Sue moved to Canton where they would enjoy their retired years together.

As a young boy he enjoyed playing in little league baseball, of which he later coached and umpired. Richard also had a passion for Quarter Midget racing, from working on the cars to sharing his love of racing with his children. Being quite the handyman, he took a great deal of pride in his work. Richard was a lifelong woodworker and crafted many items that are still used by his family today. Aside from his hobbies, he was a 32nd Degree Mason and a member of the Olive Branch Lodge #542 F. & A.M. However, his greatest role in life was being a father, grandfather, and great-grandfather.