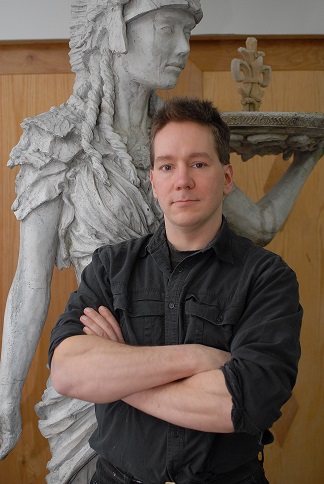 Tomak Julian Baksik, born and raised in Michigan, passed away in his home at the age of 51. Taken from us too soon, he was an artist of vibrant ingenuity and passionate commitment. His unique and exquisite works were a process of invention, re-invention, design, craft and creation. He dedicated his life to his work, his family and his friends. Tomak touched the lives of those who knew him, with both his artistic vision and his kinetic personality. He lived his life with enthusiasm and unwavering optimism, challenging himself and those around him to expand and explore. He had a deep appreciation of nature and the outdoors, where he was not bound by fences, distances or heights. He inspired those around him to join him on his treks around the world, including to Poland, his ancestral homeland.

As founder and owner of NetherCraft Creations, he designed and manufactured themed surfaces in plastics and metals. His scenic wall panels were described as one of thirteen modern haunt innovations that shook the haunt industry. His architectural works can be seen in Dubai’s first haunted attraction, the movie Zombieland, the Playboy Mansion, and HGTV’s Extreme Makeover, Home Edition.

He later founded Julian Glass, where he pioneered advances in glass for architectural surfaces, lighting and sculpture. His hand-cast bronze and stunning stained-glass creations were displayed at festivals and trade shows around the country.

One of his most notable works is the Fountain of Minerva, described by the Ann Arbor Observer as a majestic 10-foot tall statue, ”intricately incorporating the composition of Rome’s Trevi and Triton fountains, the play of water plumes at Lake Como’s Villa d’Este, and the dynamic posture of the neoclassical Diane d’Anet at the Louvre.”

Another major work is the Pennsic Cathedral, designed for the Society of Creative Anachronism (SCA), a gothic cathedral featuring two rose windows, four flying buttresses, and a vaulted ceiling. Tomak was a member of SCA for over 30 years, where he was allowed to be his own wonderful flavor of strange and extraordinary. Many were his gifts of time, toil, and effort, and his generosity and kindness knew no bounds. He had a great love of teaching and regularly opened his workshop to instruct and mentor in bronze casting, glass casting and bladesmithing. He was an esteemed and favorite guest of many encampments and SCA will dearly miss him.

Tomak’s art is best described in his own words: "I have enduring admiration for Bernini, Borromini, and the named and nameless sculptors of antiquity who pioneered the horizons of an art radiant with meaning, now etched into history. In reaching for harmony between reason and passion, I have been a slave to my art, often beginning with simple, archetypal motifs that become wildly complex before resolving into an expression of spirit. Time washes away the trivial, leaving for us these jewels of truth.”

Tomak was the dear son of Rita and Kim, loving brother of Paul, Fred, and Corinna, and loved member of an extended family including Amber, Sean, Cheri & Jerry, Amy & Andy, Mac & Emily & Evelyn, Logan & Colton, Alex & Marilyn & Arwen, Colin & Natalie, and Morgan. Tomak was a treasured friend of JJ and Johann and many others. He was preceded in death by his father Henry Baksik. Tomak left a void that cannot be filled.