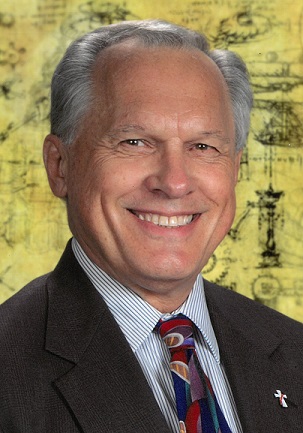 Known to many as “Deacon Mike,” he was ordained in 2007 through the Archdiocese of Detroit. Mike cherished his ministry, always sharing warm words and friendly smiles with everyone he met. He enjoyed his time as deacon at Prince of Peace in West Bloomfield and then took an administrative position at Our Lady of Sorrows in Farmington. Mike served his final deaconship at St. Owen in Bloomfield Hills where he was a longtime parishioner.

Before his deaconate work, Mike had a career in broadcast news, studying journalism at the University of Minnesota. It was there that he met his bride of 54 years, Beverly Quentin Nelson. True to his nature, Mike charmed Bev right out of a previous engagement to another man by writing love letters to her that even Cyrano de Bergerac would have envied.

The couple moved several times before settling in Bloomfield Hills, Michigan. Daughters, Aimee (Dino) Baskovic and Elizabeth (Dale Schwartz) Krysztof, recall exciting visits to WJBK TV-2 in Southfield where he was the news director. Mike was a busy man, with three TV sets in the living room to ensure he never missed a broadcast, but he always made brunch on Sundays and made sure his girls had amazing hand-crafted Halloween costumes for many years.

Mike also had a brief fellowship as a motivational speaker, which seemed a perfect fit for someone who loved performing in school plays and singing in the church choir. Mike’s daughters would later refer to him as a “bookie” when he spent countless hours on the phone in his office as part of Michaels Media, a partnership that launched a forever friendship.

Always a giver, Mike took his family and then 79-year-old mother, Alice (Phenow) Von Ende, on a whirlwind trip through Europe in 1996, stopping in Belgium to visit his uncles’ wartime gravesites. Family was very important to him, despite having moved from his hometown of Osseo, Minnesota, at a young age. He loved to shower his friends and loved ones with gifts when he could.

A truly devoted husband, father, and great “Papa” to grandchildren Alexandra, Michael, Isabella and Ava, there is no doubt that countless stories about him will circulate for many years. Mike’s six siblings undoubtedly had a front row for his antics. He is survived by eldest brother Dennis (Jane), and younger siblings Diane (the late Dave) Gust, Janice (Denny) Bredenberg, Gerald, Joel (Kim) and Earl (Katie). Many dear nieces and nephews are likely to share stories as well.

Lastly, it’s hard not to recollect Mike without smiling at the mention of his longtime doppelganger, Chevy Chase. People would stop him on the street to demand his autograph. Mike would tell these stories with a snicker, but we all knew he enjoyed being almost famous. And to those of us who knew him, he most certainly was.

In lieu of flowers, donations in Deacon Mike's name are appreciated to Alzheimer’s Association because he would have wanted research to help his beloved bride.