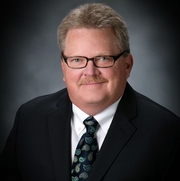 Kevin McCabe has learned much in this life. What really matters to him is family and time spent with them, not how much money is earned.

The only son born in to L. David and Gisela McCabe in west Detroit, Kevin was familiar with the funeral business, as his father was the owner of a funeral home. Growing up, Kevin aspired for a life in politics, believing then that diplomacy was about betterment. He later found that this was not true. At the age of 16, his father was diagnosed with a potentially serious condition. He recovered, but Kevin’s mother suggested that Kevin become a licensed funeral director, so that he could run the funeral homes should something happen to his father. Not having lived at the funeral home as his father had, Kevin held the perspective of funeral service as “dad’s job”.

After graduating from high school, Kevin took general studies courses and lived in the Detroit Chapel from 1979 to 1984. The decision to move into the Detroit funeral home was not a popular one from his parents’ perspective, but Kevin strongly believed that he had to “live” in the funeral home in order to understand how it operated and how to manage it. While a student at Wayne State, one day it was necessary for him to leave class to make funeral arrangements. With grace and compassion, he helped the family with the arrangements, assisted them through the visitation and conducted the funeral. After the service, the family thanked Kevin profusely and said how appreciative they were of his help. Kevin thought he was just doing his job, but realized that funeral service is not a business; it is an emotional and spiritual time for the family of the deceased. He then knew that his father had performed more than just a job.

Kevin graduated from Wayne State University’s School of Mortuary Science in 1981. Upon receiving his mortuary science license in 1982, he continued the family legacy by becoming a full-time funeral director with the McCabe organization. In 1986 he married his wife, Sandy, who is Administrative Manager of McCabe Funeral Homes, Inc. As a diversion from his profession, Kevin more than dabbles in magic. He and Sandy enjoy traveling, time spent in northern Michigan, and Kevin often contributes his spare moments working as a magician.

The biggest challenges facing Kevin now are the attitudes held toward and within funeral service. He is concerned by the lack of professionalism and ethics displayed by some cemeterians. This has kept funeral service as a “business” and has not allowed it to grow into the existential experience it is intended to be.

In addition to his responsibilities at the funeral home, Kevin plays valuable roles in many professional and community organizations. From television appearances to speaking with student groups, Kevin McCabe is working to change perceptions concerning funeral service, and to increase awareness of the grief and bereavement process.